by Adedoyin
0
7
SHARES
Share on FacebookShare on TwitterPin It

Mercy Aigbe-Gentry is not a new face in nollywood as she has plied her trade in the Yoruba part of the industry for years. The beautiful mother of two and stepmother to three girls is an actress, director, producer and a businesswoman.

She was born on January 1, 1979 in Benin,  where she is from. She is the second child in a family of 5. She grew up in Lagos, and even though she speaks Yoruba language fluently now, that was not the case when she first burst into the movie scene. She had to learn on the job and now, you can mistake her for a Yoruba lady.

She has an Ordinary National Diploma (OND) from the Ibadan Polytechnic in Financial Studies before going to the University of Lagos to study Theatre Arts, where she earned her degree in 2001. She went on to work in the bank for many years before pursuing her passion, which was acting.

She started off in 2006, acting in soap operas before she got a break into the Yoruba movies scene and has since gone on to win many awards since then.

She is married to a hotelier, Asiwaju Olanrewaju Gentry, whom she shares a son with.

She launched her clothing store, Mag Divas boutique in 2014 and she rocks a lot of outfits from the store.

Mercy Aigbe-Gentry is the beautiful woman we are crushing on this week.

Natural Hair Magic: The Switch From Curls to Sleek The shortest of the shortest ankara styles only for you, you gorgeous woman. We know you love to slay to... 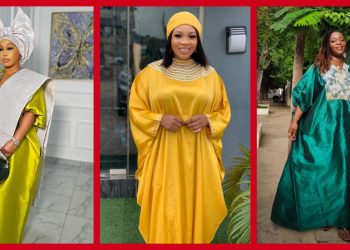 8 Rich Aunty Styles That Will Make You Smile These 9 Mother And Child Styles Will Amaze You

We love it when parents express their love for their children through fashion. We love the different styles we get...